But we forget that it’s also very humid here – and air conditioning works by removing moisture. Suddenly those humid days are a lot drier, so let’s not underestimate our Fraser Valley weather.

“How Does An Air Conditioner Work?” – In 5 Steps

Car manufacturers have made air conditioners more and more reliable, but harder to repair. The newer the car – the more likely you’ll have to outright replace the whole system.

There are just five major steps to an air conditioning system. 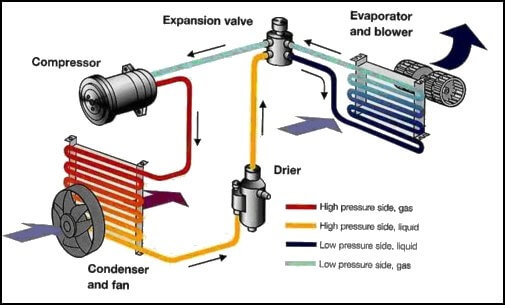 1: First there’s the compressor. It’s just a pump which moves the refrigerant gas (R134a) around the system.

2: From the compressor, it enters the condenser, which is right next to your radiator (it even kind of looks like a radiator). Its job is to cool down the now-compressed refrigerant. Compressing gas heats it up, which is why most turbocharged cars have an intercooler.

3: From there, the gas takes a short break in the dryer, which dries it!

No way, a dryer that dries? Next it’ll be a vacuum that sucks!

It does this by using a desiccant (a funny term I know). A desiccant is what you find in those little bags marked “do not eat” in a box of new shoes. The desiccants pull the moisture out of the line (which otherwise would be a bad thing).

4: Now we want to reduce the pressure of the refrigerant gas before it enter the evaporator – evaporators totally buckle under pressure, and tend to get pretty stressed out. We like our evaporators to stay calm and relaxed, so we remove some of the pressure. A quick jog through either a TVX valve or the orifice tube (depending on the car) will get rid of that pressure straight away!

5: Everything up until now has occurred under the hood. The evaporator is the only major component of the air conditioning system inside the passenger compartment (the interior of your car).

The evaporator is another device that looks like a radiator, but it’s buried in your dashboard. As the gas enters the evaporator it’s very cold, but starts to absorb the heat from inside the car very quickly. The gas is pushed on to the evaporator (and then this cold air is blown into your face, which is dripping sweat from the humid heat outside), and then the process starts all over again.

It’s what’s called a closed system. Nothing gets in and nothing gets out. Or at least it’s not supposed to. When it does, it means it’s time to have your air conditioning system serviced.

It’s not uncommon for a car to develop small leaks in its air conditioning system over the years. It could be coming from a brittle hose or a corroded fitting.

Drop by and we’ll check the performance of the system by conducting a simple vent check. If it needs it, we’ll “top off” your system with refrigerant. The beauty is that if it’s truly a small leak, you’re likely set for the summer.

If the performance of your system diminishes rapidly afterwards, now we know it’s a medium-sized leak (but don’t panic).

We can run a leak test in about 15 minutes, and fix whatever problems we find after that.

Keep in mind there’s very little refrigerant in your car’s system – as much as a can of bug spray could hold. It’s under high pressure in many places, so even a medium leak (about the size made by a large sewing needle) will empty the system quickly.

A simple solution is to a add a chemical that plugs the leak as we refill the system, like platelets in your bloodstream do when you cut yourself.

Other problems that can cause your air conditioning system to fail include an electrical fault in the system – maybe as simple as the switch on your dashboard has shorted out. Or it could be a little more complex, but they’re rarely difficult to isolate.

Another issue can be the failure of the compressor, which is rare.

What’s more likely to fail though is the clutch beside you motor that turns on your A/C compressor. The problem is, manufacturers are moving to selling just a single unit, compressor with clutch, so you can’t just buy the small cheap part. Easy for them, not so good for us. I’ve been able to fix some of these clutches with adjustments before, but it’s not always possible.

For example, I had a couple of Mitsubishi Lancers come in with broken air conditioners. I quickly determined that this clutch on each vehicle had been corroded over the winter. Once I cleaned the clutch and adjusted the shims, the system worked fine (for both cars). This won’t work for all cars, but I promise I’ll do my best to properly repair what’s broken and the lowest cost possible.

If you let me know exactly how long your A/C has been broken, it will really help me diagnose the problem quickly.

“How Much Do Air Conditioning Repairs Cost”

Many air conditioning system problems are minor and relatively straightforward to repair; it’s usually not too expensive.

Often you don’t need to replace the compressor though, and I can just add a $20 can of “stop-leak” into the A/C system to try and plug any leaks in the compressor. Usually that is at least worth trying

There are 3 main ways to prevent A/C problems in your car:

First, you can make sure the air conditioning line aren’t brushing against something else in the car (they’re often held on by plastic clips, which over the years can fail). When the scrape back and forth like this, sometimes it chews a hole out of the line.

Second, if you notice a drop in performance in your car’s air conditioning system, bring it in right away. We may be able to correct the problem while it’s small and inexpensive.

Third is to mind where you drive. Often your air conditioning compressor is mounted low in front of the engine, exposed to rocks and dirt in the summer, and road salt in the winter. Keep it clean. When your clutch or compressor get too dirty they can seize up and stop moving.

If your A/C has been broken for a while, or just isn’t “cold enough”, give me a call. I know it seems minor, but having a working A/C makes driving your car so much more enjoyable – it’s almost always worth it. You’ll be smiling all summer long with the gut-feeling of satisfaction when that cold air pours out of your vents.

If need a mechanic for repairs or maintenance on your car, contact me here.